Over The Stones, Under The Stars 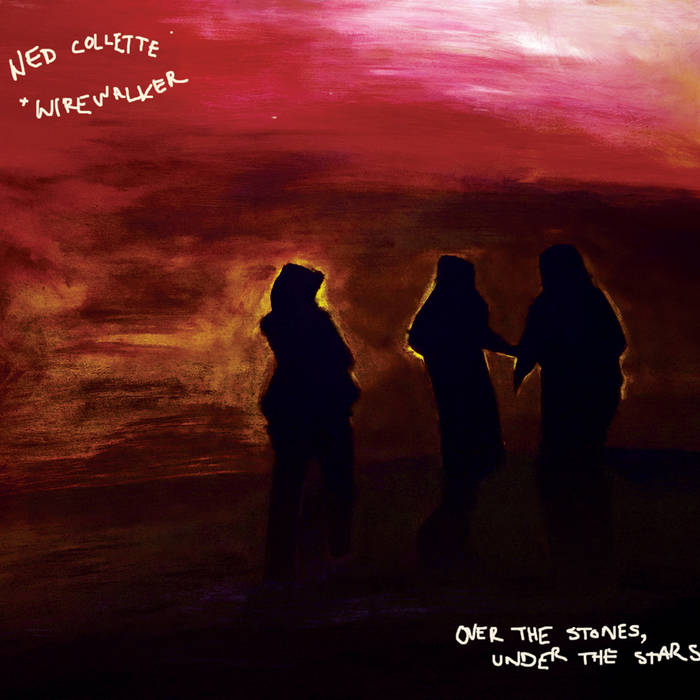 Ned Collette's third album, and the first recorded entirely with Wirewalker. Mostly written during the 2008/09 Glasgow winter, recorded on a rural property in Victoria, Australia and mixed by Joel Hamilton in New York City in the summer of 2009.

"Sadly, there’s no guarantee the human race will go out with a bang. More likely it’ll dwindle away just as it did in Ballard’s The Drowned World - all our luxuries and exploits will rouse nature and she’ll eventually take herself back, forcing us to take refuge on the margins of the land we’ve made inhospitable. If that seems unavoidable, well, that’s because it most probably is, and here Ned Collette rails against the corrosive, privileged ennui that threatens to drown the modern world; the dangerous apathy, the spoon-fed indifference, the mores of a “golden age” that could soon burn out.

Because Ned Collette’s music isn’t a cosy refuge anymore, it’s a place for mulling over uncomfortable truths; for taking stock of just how fucked we’ve become. Here, a song can begin triumphantly but end on a sour note. During ‘All The Signs’, Collette denounces learning “just to earn” in favour of knowledge for the sake of it. He promises, over a lush bed of organs and rich guitar chords that “as unfashionable as it may seem, cutting it that way is not a dream of mine”. You want to punch the air along with him in his indignant cry, but his passion turns to bitterness by the last verse; the stern, circuitous ensemble mimicking pride’s intoxicated swagger and its eventual wobbly collapse. It’s a long way from the domestic comforts of 2006 debut Jokes and Trials, and even the markedly less “topical” songs seem bluntly reprimanding; the tirades of a drunk cynic.

There are a few songs here like that - so uninhibited in their mission to denounce the follies of modern life that they’re prone to become exhausting. I loved this album for a while, picked it apart like all Collette’s work deserves, found it astonishingly brilliant and then cowered from it: its blunt honesty too overwhelming, too close to home. It’s not a brash call to arms or anything like that - this isn’t John fucking Butler. ‘Your Golden Heart’ in particular dwells long and thoroughly on the familiar pitfalls of 21st century life and results in what can feel like a lecture, but with no quick fixes to blindly spruik.

But we need songwriters like Collette in a world where these “blatant” truths are often ignored, or tacitly avoided. It helps that the overall tone of Over the Stones, Under the Stars is one of longing and the hope to salvage, as if all that we’ve lost is something we should try to snatch back. Wirewalker (drummer Joe Talia and bass player Ben Bourke) brings a new spaciousness and extravagance required for the task, while Collette’s vocals have evolved from his hushed confessional roots into a more poised and commanding presence.

He’s certainly learnt a handful more roles since 2007’s Future Suture and none sound underdeveloped. Ned Collette & Wirewalker is a severe rock band of elemental proportions: this is music as foreboding weather, all downcast greys and apocalyptic reds, thick and blustery and beautiful. ‘Aspect’ sounds like the sun birthing from swampland, a percussive stagger strung up by incandescent guitar chimes, a drowsy rumination at sunrise after many furrow-browed hours on the red. The following song ‘Why We Can Be Apart’ breaks the spell and thrusts us straight back into the glare of summer, with a focus on the personal. Indeed, there are tender moments here, and even oblique ones, but the crispness of Collette’s scattered world-weary proclamations tend to possess the theme.

He returns to that “golden age” twice on Over the Stones, Under the Stars. “The gold is just a stipend and the age is just for show.” There’s nothing subliminal about this. Ned Collette is backed by a permanent band now, and he’s got the courage to be demonstrative. In a time when white collegiate obscurantism dominates rock music, Over the Stones comes as an enlivening slap in the face: rock music as a grandiloquent cautionary tale. And when things do look like they’re going to shit, Collette’s tales are imbued with importance and sound strikingly vindicating. Australia doesn’t have many better songwriters, neither past nor present."